A work of architecture that is at once fresh and enduring, dateless, that is a solid testament to a spirit of integration and cooperation, reflecting the city – and the neighborhood – where it’s built. 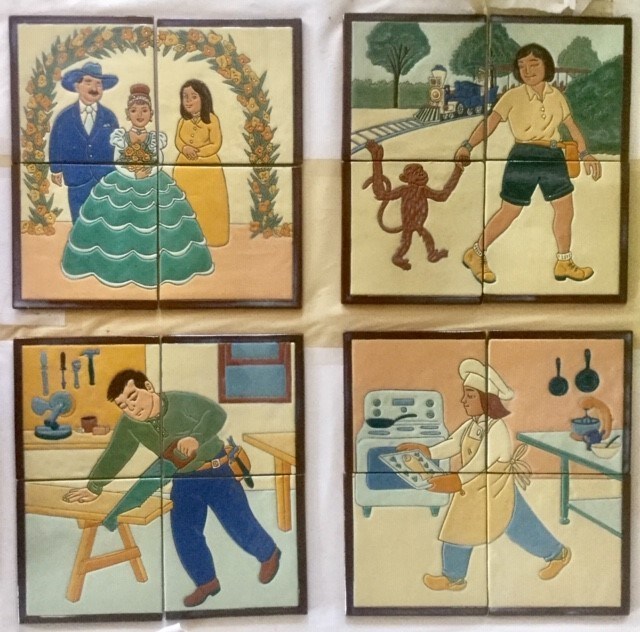 “I’m looking forward to just sitting down and making a pot,” said San Antonio artist Diana
Kersey with a sigh, as she surveyed her cluttered studio in the Kenwood neighborhood last
month.

Nearly 1,000 ceramic pieces – 8,000 pounds of clay – were packed in boxes, ready to
ship downtown and be installed like a jigsaw puzzle as a mural over the main entrance of the new office buildings on Broadway at the Pearl.

“I’ve been working nonstop on this project – and nothing else – since last February. This has definitely been the toughest thing I’ve ever worked on, but it’s very satisfying – now.”

Kersey probably could be speaking for the whole team – owner, architect, artists, builders, and contractors – that has produced over the past two years a work of architecture that is at once fresh and enduring, dateless, that is a solid testament to a spirit of integration and cooperation, reflecting the city – and the neighborhood – where it’s built.

And it is a team. As the final bricks are laid this month – over a million of them, in three shades of cream, buff, and reddish orange – on the 12-story Credit Human building, the eight-story Oxbow building, and a 936-space parking garage, a collective sigh can be heard, signaling an intense desire to get on with the next phase: Exterior construction should be completed in March, and the buildings will be occupied in the fall.

“We spent as much time planning the building as we have in building,” said Stephen Hennigan, president and CEO of Credit Human, which has been in San Antonio for 85 years and will consolidate about 500 employees at the Pearl from two existing office buildings. “We had to establish common values. We broke a lot of bread, just getting to know each other. There were several iterations of design and different building configurations that we went through. It was a really healthy give-and-take, and we built up a lot of trust.”

“A lot of thought went into these buildings,” said Elizabeth Fauerso, chief marketing officer of the Pearl. “We wanted to work with Don again, as we had with the Cellars, because he puts so much of the South Texas architectural vernacular into his work, without seeming to imitate a historic style. These buildings feel like they’ve been here a long time – and will be here a long time in the future.”

McDonald, best known for his ranch houses and Monte Vista historic restorations, is building his first office complex at the Pearl. Before sketches were even made, he said he studied work by Heinrich Portscheller, the 19th-century brick mason and builder who worked primarily in Roma, in Starr County, forging a modern style (for the time) with classical details ornamenting doors, windows, and cornices, as well as John Fries, who gave us the Menger Hotel and the curved parapet on the Alamo.

“It’s not that you look at the Pearl buildings and say, ‘Oh, Portscheller, Fries,’” McDonald said. “We wanted to establish a timelessness to the buildings. If you look at the project a certain way, you read 19th century. Viewed another way, it’s very much 21st century. We like that ambiguity.”

The buildings are McDonald’s response to the industrial nature of the old Pearl Brewery site, as well as a desire to approach the buildings as a pedestrian. The lower floors of the Oxbow will be stenciled – or “graffitied,” as McDonald puts it – with a quatrefoil pattern that evokes the original facade decorations of Mission San Jose, and the buff brick color is a San Antonio staple.

“Walk down any alley downtown and you’ll see this buff-colored brick on the back of all the old buildings,” he said. “It’s also a response to the old Pearl brewhouse [now the Hotel Emma]. The orange D’Hanis brick [of the parking structure that links the two buildings] evokes the Pearl smokestack.”

An arched loggia borders three sides of the grounds (“Not many owners want to lose 12,000 feet of space to an arcade,” McDonald says with a smile), which will be illuminated by punched-copper fixtures by Isaac Maxwell, while De Leon has hung massive steel rings evoking horse ties at waist level on the outer walls. I-beams jutting from the facade will be softened with hanging wisteria, which has been nurtured at at a local nursery.

“When I think of any great city, I think of walking through arcades,” McDonald said. “They’re just such a beautiful respite. The idea of the arcade as opposed to a sidewalk was a more intimate gesture. It’s an invitation to explore the interiors of these buildings. And so then what we tried to do is weave this regional fabric into place, as if you are walking through a neighborhood in San Antonio,” McDonald said.

Given the narrowness of the 3-acre site – about 200 feet, between a major freeway and a busy downtown thoroughfare – the Pearl project was “an extremely complex structure to put together,” McDonald said.

“When Diana came back with the river theme, we really responded to that,” he said. “We wanted to reinforce the history of the site, which is industrial, with its positioning near the headwaters of the river.”

Kersey’s two high-relief murals, which will cover more than 650 square feet, occupying strategic facade real estate at the entrances to the Broadway and Grayson sides of the Oxbow, are called The Riparian Edge by the artist. That means, basically, the zone where a river or stream meets the land, and all the flora and fauna that entails. In fact, the Oxbow is named for the nearby U-shaped of the San Antonio River.

“I wanted to connect commerce all the way back to the river,” she said.

Kersey, whose other public art projects include the “turtle bridge” over Mulberry Avenue at Brackenridge Park, has created a sort of visual narrative of the area’s original ecosystem, populating the mural with herons, turtles, bees, Mexican free-tailed bats, cicadas, yellow water lilies, and yellow cactus flowers. She ties nature back to architecture with quatrefoil forms and ornamental borders.

“Not a lot of artists have done big architectural projects in clay, so we kind of invented the wheel here,” she said, detailing a process that involved drawing on 4-by-8-foot insulation sheets and firing oddly shaped fragments of the whole in small kilns at 2,125 degrees for 24 hours.

To get the look she wanted, Kersey made three-dimensional models of the creatures, heavy as kettlebells.

“I wanted more stylized animals, and I didn’t want it to look too refined,” she said. “In all my work, I want it to be apparent that this is clay. I don’t want to dominate the material, I want to be in partnership with it.”

While the buildings are grounded in 19th-century South Texas influences and substantial earthy materials – brick, stone, steel – their thrust is vertical, and they are considerately lightened and modernized by massive, custom-constructed mullioned window banks, nearly floor to ceiling, and by the sculptural steel rooftop structures that support 2,638 solar panels.

Hennigan drove the sustainability aspects of the project, which is approaching LEED (Leadership in Energy and Environmental Design) Platinum, the highest energy-efficiency certification and one of the most impactful facets of the building industry.

For starters, the buildings are as airtight “as a Yeti cooler,” said Hennigan, thanks to a “high-performance envelope” – structure, walls, windows – that will work in tandem with a geothermal heating and cooling system drawing on 150 wells dug at the site to drastically reduce water and energy use.

Integral to the plumbing design is a system that captures rainwater and HVAC condensate for non-potable uses such as toilet-flushing, landscape irrigation, and cooling tower supply. Nearly 140,000 gallons of runoff can be stored on site in underground cisterns and an enormous tank the size of a train car salvaged from the Pearl brewery and upended vertically in its own I-beam cradle at the back of the buildings.

Credit Human, which is based at two 40-year-old office buildings on Interstate 10 and Loop 1604, will not only be changing its location, but its corporate culture at the new headquarters, Hennigan said. For example, there will be no offices, but open floorplans, allowing air purified through a rooftop filter system to better circulate. “I won’t even have an office,” he said. Employees must exit the parking garage and enter through the main entrance on Broadway, where they can take a seven-floor staircase intended to facilitate conversations on the way to the floor where they work.

“We’re eliminating all plastics,” Hennigan said. “We’re using repurposed wood inside, and the interiors are going to be left as unfinished as possible. We’ll have bike racks, car-charging stations, food-service partnerships, commuter resources. We want to try to create a more social community. Our lobby will have a financial health center, which allows members of our team to spend more time with our customers. That’s a big reason we’re at the Pearl. We wanted to be part of the urban fabric, in an underserved neighborhood, not in the suburbs or out at some place like the Dominion. That’s not who we are.”

Artwork inside Credit Human evokes a sense of that community. It will include about 200 four-panel tile works of everyday people – a baker, a carpenter, a postal worker, proud parents with a daughter at her quinceañera – hung on walls.