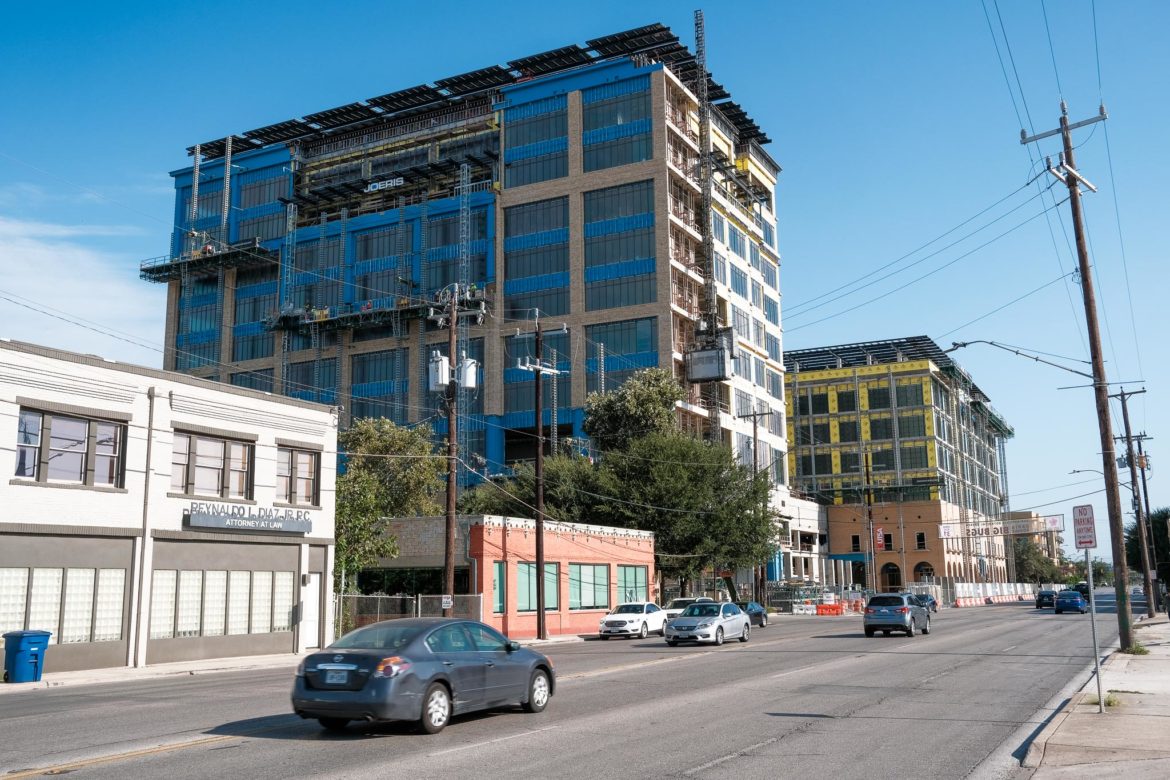 “Visionary is a word that’s overused, but in your case, I think it applies,” Councilman Manny Pelaez (D8) told Credit Human CEO Stephen Hennigan on Thursday. The Council’s five-member Community Health and Equity Committee heard an overview of the project, which is slated for completion in August next year.

Compared to other buildings of similar sizes, Credit Human anticipates its new headquarters will use nearly 50 percent less electricity from CPS Energy, use 97 percent less potable water, reduce carbon emissions by 1,447 metric tons per year, and retain 90 percent of stormwater that lands on the building and surrounding surfaces on its property, Hennigan said. It also will feature a pocket park and three solar arrays atop each of the structures it plans to build there; a 10-story tower, an adjacent six-story mixed-use office building, and a parking garage.

“It just makes good business sense,” said Hennigan, who previously served on the board of CPS Energy.

Credit Human considered moving its headquarters out of San Antonio, but instead consolidated its three operation centers into one near the Pearl Brewery redevelopment north of downtown at 1703 Broadway St. The credit union received $8.8 million in City and County incentives, and the new location will house roughly 500 of its employees. It will occupy seven or eight floors and lease other spaces.

Credit Human has gone far above and beyond what’s required of developers by City rules, noted Councilwoman Ana Sandoval (D7), who chairs the committee. “Are there other recommendations … to facilitate this type of work?”

Alejandra Lopez, interim director of the City’s Economic Development Department, said one consideration for City development incentive packages – which give tax breaks and fee waivers for targeted developments – is whether the project has an emphasis on sustainable building practices.

It’s not a required feature of projects that the city gives incentives to, Lopez said, “but we can definitely look at more options [to incentivize sustainable development].”

Some Council members were initially concerned when the incentive package for the project was approved in 2017, but that was related to incentivizing an area that already had seen significant private and public investment. That issue ultimately led to an adjustment of center city incentive packages to encourage affordable housing.

The less than 5 percent of the total building cost will pay for itself in roughly 12-13 years, Hennigan said. The internal rate of return is 11.45 percent.

“[The building will be] the best portfolio assets we have,” Hennigan said.

He sees more developers buying into the business plan of sustainability in the future in San Antonio.

“It doesn’t take much push,” he told the Rivard Report after the meeting. “There’s a social effect. … We’re getting calls about it from all over the nation now.”

In addition to obtaining the Leadership in Energy and Environmental Design (LEED) Gold Certification, Hennigan told Council he also wants the culture of the workplace to emphasize sustainability. The building features bike racks, is close to bus stops, and likely will ban single-use plastics entirely.

He expects the other businesses that move into the offices and ground floor retail will have a similar mindset.

“I don’t think they’re going to have a choice,” he said. “It would be kind of hard to live in this building and not embrace this.”