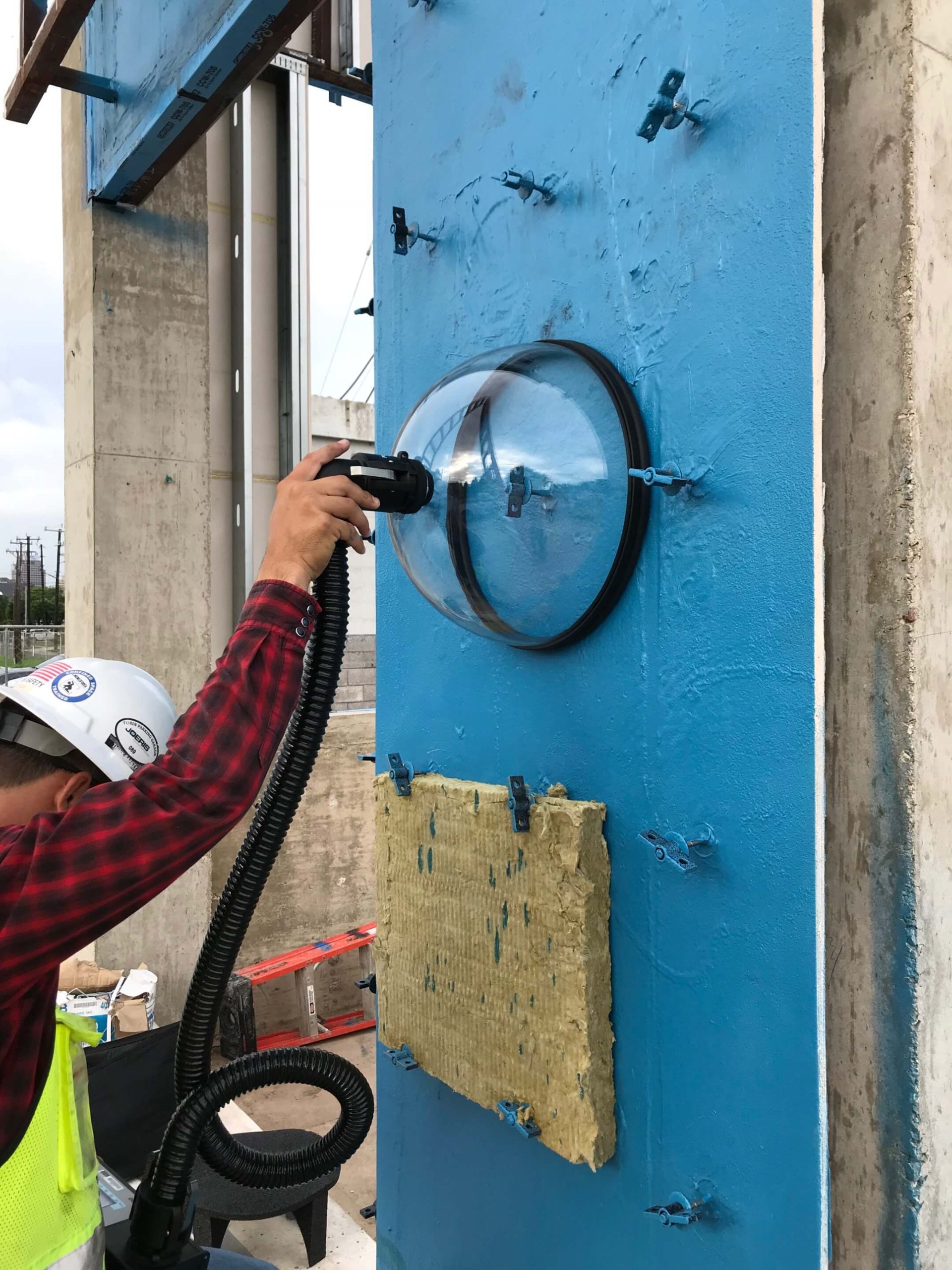 According to the latest estimates, building operations account for 28 percent of global carbon emissions. A report from the United Nations’ Intergovernmental Panel on Climate Change found that reducing energy consumption by buildings in turn reduces carbon dioxide emissions. One of the best ways to do this is to improve the airtightness of building envelopes, which vary widely in terms of performance. Research by the United States Department of Energy reveals that air leakage accounts for about 6 percent of the total energy used by commercial buildings in the U.S. More specifically, about 15 percent of the energy used by the envelopes of commercial buildings was due to air leakage. Knowing this, how can building industry professionals better design, specify, and deliver projects that reduce this transmission?

An air barrier reduces airflow between interior and exterior environments. It’s one component of a complete weather barrier assembly, along with a heat (thermal) barrier and a vapor retarder. As defined by the Air Barrier Association of America, a weather barrier is a “set of assemblies designed to resist the loads imposed by all elements of the weather, including solar, wind, airborne debris, heat, flooding, liquid water, and water vapor—commonly referred to as the building enclosure.”

Many materials can perform the function of an air barrier. Because these layers control flows through a building envelope, materials can end up satisfying multiple functions; for example, a fluid-applied membrane can serve as a barrier against water, vapor, and air.

Air barriers were one aspect of an impressive environmental strategy undertaken during the realization of a new building for Credit Human in San Antonio. Designed by Don B. McDonald Architect with Kirksey Architecture and built by Joeris, the classically styled center near the bustling Pearl Brewery stacks eight floors of office space over four parking levels. The project “leverages biophilic principles, elevated indoor air quality, and material transparency to create an environment that radiates wellness,” according to Kirksey.

Steve Hennigan, Credit Human’s president/CEO, was intent on making a healthy interior environment for the company’s employees. This vision, for which Hennigan set ambitious climatic goals, extended to air leakage. While the U.S. Army Corps of Engineers’ standard for airtightness is 0.25 cfm/sf @ 75 pa, project leaders set a target rate of 0.1 cfm/sf @ 75 pa. To ensure that this goal was met, Joeris undertook extensive on-site testing and later documented it in an in-depth case study. (The full deliverable is available online.

To start, curtain wall units were shop water tested prior to installation. The building, which utilized a Carlisle air and vapor barrier along with other sealant products, contained 311 envelope penetrations and utilized 9,184 brick ties, each of which was sealed with Barritech VP to avoid possible air leakage. Flashing and termination sealant were inspected to avoid “fish mouthing,” or crinkling. Basement CMU and core walls were sealed, and waterproofing and an air barrier were installed between the garage levels and upper interior floors. Cold joints on the underside of the roof were also sealed using a fire spray product.

Detailed inspection of waterproofing included water testing and selected demolition to observe water movement below finished surfaces. TSI Energy Solutions conducted tests using a PosiTest air leak tester in addition to blower and water tests carried out by others. Results found that the tops and bottoms of interior walls were the weakest points for air transmission, and floors especially, as dust and debris weren’t cleared before an acoustical sealant was installed, creating a leak, in addition to screwheads that weren’t taped and floated or covered by an air barrier. Additional small gaps were inspected and filled after installation, such as on exterior sills where fire-rated sealant was used.

How did the Credit Human building fare on the whole? Final test results revealed an extremely low amount of air leakage, meeting the goal set by Hennigan. This was paired with other sustainability features, including geothermal wells, rooftop solar installations, and rainwater catchment. Consequently, the LEED Platinum–certified facility uses 96 percent less electricity from the grid and 97 percent less municipal water than a typical building of its size. Diligent air barrier installation reduces operational expenditures for a building over its lifetime. It might be a small savings when compared with global figures, but every bit helps.